Short-term rentals have been a controversial topic since their use has increased significantly, particularly in tourist towns. Faced with this phenomenon, which creates certain neighbourhood problems with permanent residents, the Town of Sutton has also had to take into account two other considerations: on the one hand, the undeniable economic contributions of short-term rentals to local commercial and tourist activities, and on the other hand, its impact on the reduction of long-term rental housing stock.

After having carefully analyzed all the issues raised by the short-term rental, the Town of Sutton has submited to the population proposals for regulatory changes that will govern the practice throughout the territory.

A pragmatic and reasonable approach

On April 6, Council abolished the Short-Term Rental Policy that had been in effect since 2013, but no longer met the current situation. It then temporarily subjected tourist accommodation to the zoning by-law that defines the zones in which the C-507 use l’usage C-507 is permitted.

Rather than create a new by-law on short-term rentals, the Town chose to use the regulatory tools at its disposal, namely the Zoning By-law (in French only) and the Conditional Use By-law (in French only), by proposing targeted and relevant amendments. Short-term rentals of principal residences would continue to be permitted throughout the territory, while those of secondary residences would be subject to a much more restrictive framework.

In its reasoned approach, the Town has thus favoured regulatory adjustments that should reduce the nuisance caused by short-term rentals while encouraging the return to the market of long-term rental properties that are increasingly lacking.

The population called upon to give its opinion

The Town’s proposed regulatory changes will be presented to the public in a transparent manner. On September 22, presentation documents that provide an understanding of proposals entire process have been be posted on the Town’s website for the public to review. From there, a public meeting has been held on Thursday, September 29, from 7:00 p.m. to 9:00 p.m., to present the Town’s proposals in person and answer questions from the public. The recording of this meeting is available in the video area on this page.

The public now has then have 30 days, between October 5 and November 4, 2022, to submit their comments by mail, email, or form. Details will be announced at the public meeting.

The Urban and Land-Use Planning Department will compile these comments to integrate them into the current revision of the urban plan and regulations.

The Town of Sutton wishes, at the end of this process of analysis and concerted proposals, to offer a perennial solution to this important question of short-term rentals in Sutton.

The mayor outlined the process, supported by the documents presented, and answered questions. The meeting was recorded on video and can be accessed here in the Videos area on the right of this page. 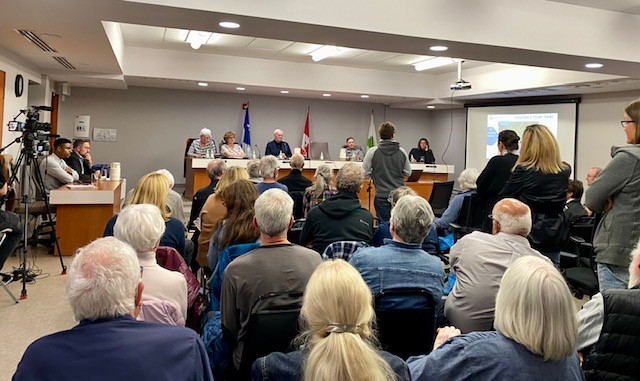 The public has until November 4, 2022, to file written comments on the proposed regulatory changes.

All the comments that were sent by our citizens on the short-term rental are now online on the Dream Sutton website. 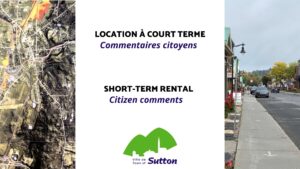 At the September 29 public meeting on the fundamental issue of short-term leasing, the Town called on those affected or interested in the issue to provide input on the proposed changes by November 4.

No less than fifty-two people participated in this vast collection of comments, opinions, suggestions, and questions. We would like to thank our citizens for their active contribution and for the quality of their interventions,” commented Mayor Robert Benoît. Given the number of responses and the importance we attach to this subject, we wanted to take the time necessary to analyze and respond to them as part of our process of revising the urban plan.”

As this document is not immediately translated, the comments have been published in their original language and the responses are provided in the same language.

As announced by the Mayor, a new public meeting will be held in February (date to be confirmed shortly). The Town wishes to present new proposals for regulatory changes that take into account the feedback received.

If you have a question or would like to make a personal comment about this project, please fill out the form below.

Send a message to the team about the project : Short-term rental

Thank you for your message! We will respond to you shortly.

Please note that your comments will be verified by the Town of Sutton's team during normal business hours before being published, to ensure that they respect the moderation policy.

Comments published here in the English version of the site are not duplicated in the French version unless they have been voluntarily copied and published by their author. If you want your post to appear in both versions of the site, you must copy and republish your comment in the English version (Mur à idées tab, in French). It is not mandatory to translate your comments, as everyone is free to express themselves in the language of their choice.

FAQ
The frequently asked questions is empty for now. 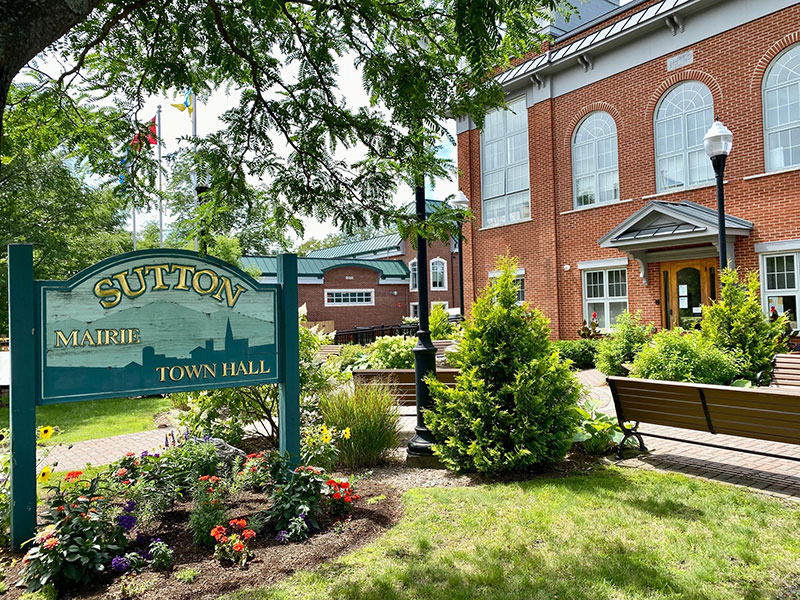